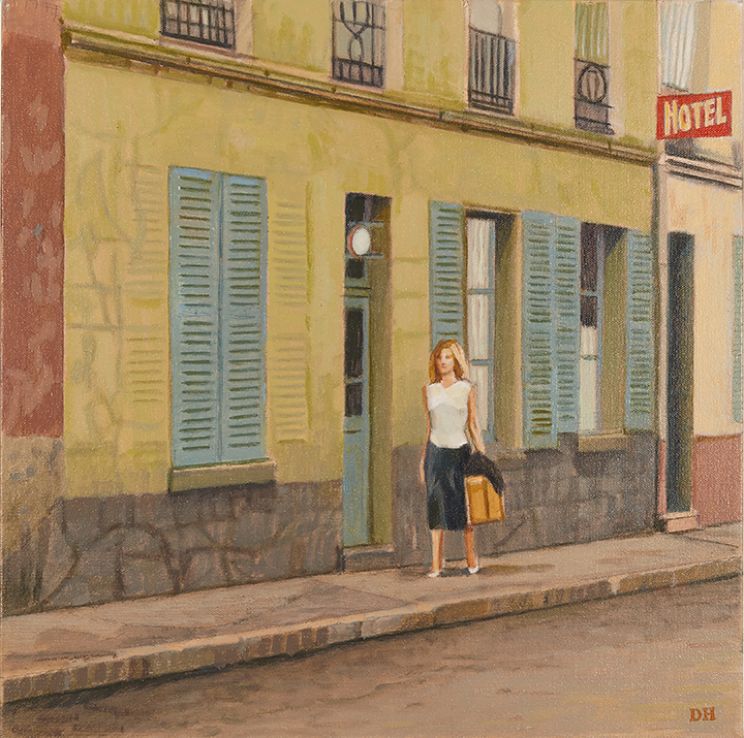 Duncan Hannah creates a world evocative of an earlier era, with quiet theatricality and unspoken narratives. With Europe often the setting for his atmospheric scenes, the artist reinvents a period in which fashionable figures wander the streets of London and Paris, a classic car races in the Monaco Grand Prix, and a train makes it way through the snow-laden Alps.

Hannah favors mysteries left open to interpretation, and likes to wander in time, as a filmmaker or novelist might. With this bit of distance, his paintings become fictions of an invented world.

In addition to his narrative scenes, Hannah has produced a new series of paintings over the past year in which he has reinvented the covers of French and Italian fan magazines with his favored movie starlets from the 1950s and 60s such as Catherine Spaak, Dominique Sanda and Femi Benussi.

“I retreated to my Cornwall, Connecticut studio on March 13th.There was none of the distraction I usually deal with in my Brooklyn life, so I was able to build a momentum like never before and indulge myself in my filmic fantasies on small canvases. I began to put my movie star crushes on the covers of magazines that I collect. I was inspired not only by foreign cinema, but by 60s English Pop artists Peter Blake and Pauline Boty, who I’d long admired.” -Duncan Hannah, 2020

Duncan Hannah’s work has been exhibited extensively in the United States and Europe, and is the collections of many important museums including the Metropolitan Museum of Art, New York, and the Chicago Art Institute.